SCHOLLENBERGER at the 3rd Explosive Ordnance Conference in Berlin

Dealing with sites containing unexploded ordnance is an extremely complex issue, as was shown yet again at the third Explosive Ordnance Conference on 27 and 28 May 2019. The Institute for Federal Real Estate (BImA) had invited over 200 experts from all over Germany to Berlin to a symposium. SCHOLLENBERGER contributed to the event with a presentation and in the concluding podium discussion.

Under the keynote topic “Towards Uniform Federal Standards”, experts presented talks on solutions for developing nationwide standards applicable to clearing explosive ordnance. Clearing munitions and other unexploded ordnance left behind by the First and Second World Wars is a century-long task, a task future generations will continue to face. This issue also affects sites previously used by the armed forces that are to be repurposed for civilian purposes, such as the large converted sites managed by the Institute for Federal Real Estate (BImA).

There was agreement among the attendees that harmonizing the various standards for clearing ordnance in Germany was needed so that clearance can proceed faster and more cost-effectively and efficiently. A uniform approach was required for resolving responsibilities and accountabilities, financing, qualifications, procedures to be followed, and liability issues.

As one of the conference’s 17 speakers, SCHOLLENBERGER ’s Dr. Boris Töller explained the requirements that needed to be satisfied in order to “implement quality standards in UXO clearance” from the point of view of a member company of GKD (German quality control association for the clearance of explosive ordnance). In a lively podium discussion concluding the event in Berlin’s Kronprinzenpalais, various positions were exchanged and a common objective to introduce universal standards was formulated in clear-cut terms. 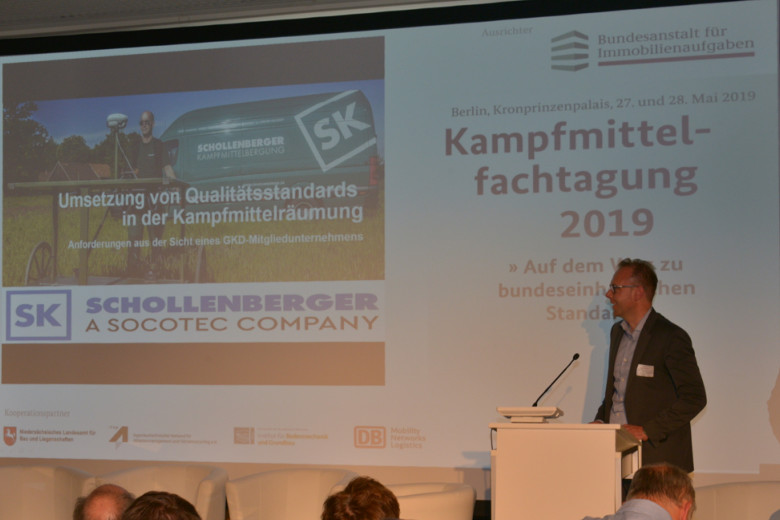