SOCOTEC Certification France delivered the first certification BIM Model – As Built, demonstrating a student accommodation building - built by Nexity in partnership with Engie-Axima – is fully compliant with the built structure.

Guaranteeing compliance with the BIM model and the completed structure

This certification allows the project manager, when handing over a structure, to supply certification from an independent organisation that confirms the building is fully compliant with the data and BIM model provided.

BIM Model – As Built certification is based on a very detailed set of guidelines drawn up by SOCOTEC Certification France, in collaboration with the BIM experts in the SOCOTEC Group and BIM in Motion, SOCOTEC’s start-up partner.

As part of the certification process, several phases across different key stages of the project are audited to include:

Project managed by Nexity, on behalf of Nexity Studéa, the certified building is the Le Lauréat student accommodation block in Villejuif, near Paris, which includes 68 apartments for a total surface area of 1,557 square metres. Handed over in September 2017, it is built of cross-laminated timber (CLT). The certification has been delivered after construction, based on post-handover audits.

The introduction of BIM Model – As Built certification is part of SOCOTEC’s development of an innovative range of BIM services.

SOCOTEC teams will be present at the BIM World fair, to be held 2-3 April at Paris’s Porte de Versailles conference centre. They will be presenting all BIM services and holding a seminar on BIM Model certification on Monday, 2 April at 12.00 with Nexity and SXD (Engie-Axima). 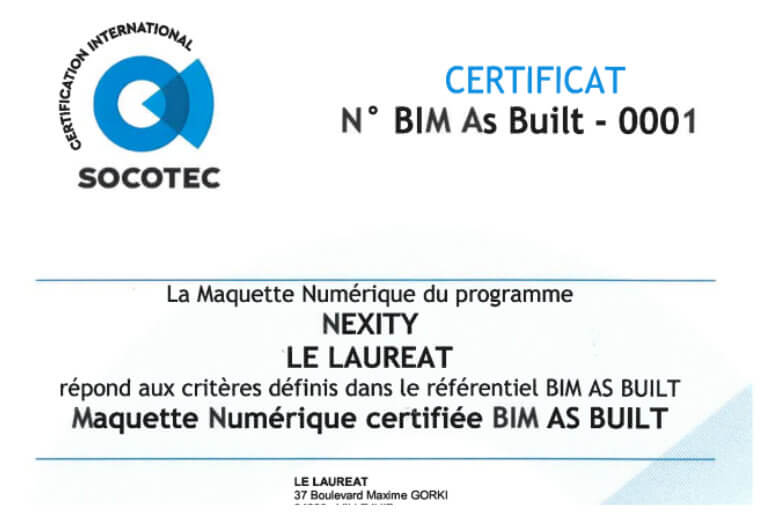